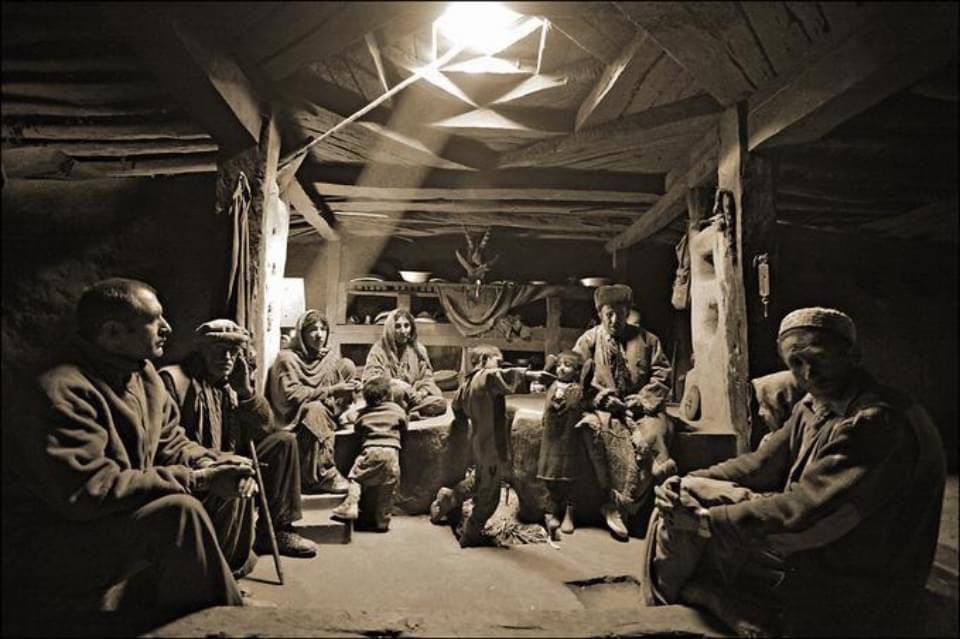 It was only recently that it came to my knowledge that the archaic architecture of our houses in Chitral and Gilgit Baltistan had links to ancient Sogdian architecture from Central Asia, beyond the Pamir mountains.

But what makes it interesting is that us Chitralis had made an addition to it which had something to do with a hearth, segregating levels and a small fairy.

Now the archaic housing patterns in Chitral had a central room known as the Baipash whose possible etymological basis is ‘no roof’, signifying the hole in the roof.

This room used to be beautifully decorated with 4 pillars near the centre where the hearth was located and one behind the hearth known as the Shero Thoon (Lion’s Pillar).

The roof between these pillars was decorated with diagonal squares, one on top of the other, spiralling inside until it opened to the hole. This was known as the ‘Gherarum’ meaning Whirl.

All this was centred around the main hearth called Dirang or Didang which made another addition to the architecture by further segregating the room into levels, signifying status.

You see your proximity to the hearth signified your status. Your age, your profession, your skills, your prowess, and your relation to the host decided which level you’d get to sit in the room on.

Often a man would promote his sons when they brought respect to the family or proved their mettle infront of others.

The order used to be in a descending manner, the owner sat closest to the hearth, the least important person would sit the farthest.

But sitting too close to the hearth had a catch, you had to deal with the Feru-tis; the hearth fairy of Chitral.

The very name of Ferutis is derived from the word ‘Feru’ as in ash and the ‘tis’ can be attributed to have come from the sound of crackling ember.
This little fairy or rather pixie, wasn’t malevolent but was extremely mischievous. She lived in the hearth And would often tease the owner, wake him up, or steal his belongings and keep them in the hearth. So for the most distinguished man in a gathering, his proximity to the hearth meant dealing with the pranks of the ferutis.

But now naturally a question is raised, why were our ancestors so interested in the hearth?

Well there are 2 theories. One is that due to the climate of Chitral, the entire winter was naturally spent inside the room. And obviously the hearth being the primary source of heat and at the centre of the room, developed some sort of a reverence for itself in Chitral. Since the room was the only place of interaction between the family members, with time the central position of the hearth yielded for it a niche in the Chitrali household where it became the centre of a number of traditions and superstitions. We view such happenings in other places with colder climates too.

There could also be a third theory, my personal belief, that considering how we inherited this architectural style from Central Asia and how it’s roots lie in the Iranic world, we might’ve simply inherited the reverence for the hearth with the architecture. This would mean that its roots might be in Zoroastrianism but Zoroastrianism itself wasn’t in Chitral.

Whatever the truth might be, it is certainly interesting to see how our region incorporated an external architectural type and introduced a local influence on it.

Benefits and importance of forests